The front fenders and grill parts are all standard 55 - 56 parts from LMC Truck, I just don't like the look of the 57 grill so I used the earlier model.  I wanted to do something different with the look of the hood as well; it just looks big and boxy to me.  The 58 - 59 hood has a lower frontal profile that was what I had in mind.  This hood has the same rear profile as the 57 but the front is 3" narrower because the 58 model started the dual side by side head lights.  The side profile is also different then the 57 so it doesn't match the fenders.  I was able to meld the two hoods together to achieve the look I was after and most people won't know it doesn't belong, those in the know will be confused as to what year the truck really is.

Work started by modifying the inner fenders to clear the upper "A" arms of the new IFS system installed a couple winters back.  This was accomplished by careful measurements and several trial fits to get the cut out where it needed to be.  Right now the cut out is there to clear the arms, but may need additional trimming once everything is in place and I move the arms full travel.
The LMC fenders and front cross pieces were fitted in place next and I must say, they don't fit all that well.  The right side is better than the left as it appears the left fender is 3/8" shorter at the top which is causing a large gap with the door.  The body line doesn't line up well with the doors either, but I will need to perform the door re-skin first then work on improving the fender fit; nothing a little cutting, welding and grinding won't fix.

I install the LMC chrome 55 - 56 grill and it fits so - so and will need some re-work as well, but this will come later; on to the hood!

Melding the two hoods together started by cutting the 58 hood top from its side and under frame.  The 57 hood was cut about mid-way up the radius transition from the top to the sides and the front cross brace was also removed.  At this point the 58 top skin could be set in place on the 57 frame and it fit reasonably well.  Stepping back and looking at what we had it was clear the sides of the 58 hood skin needed to be trimmed to better match the curvature of the 57.  Several trims and fitting took place until the two hoods were happy and fit well down each side.  As the sides were trimmed the front of the 58 hood dropped down which brought the front skins into alignment, and lowered the overall profile of the new hood. 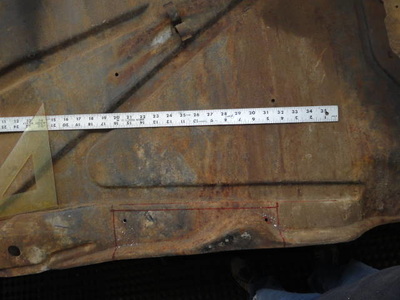 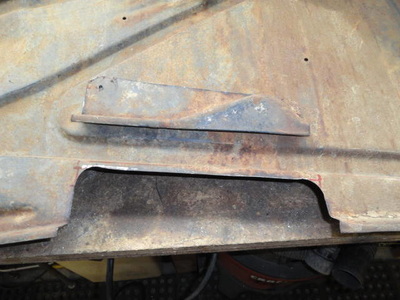 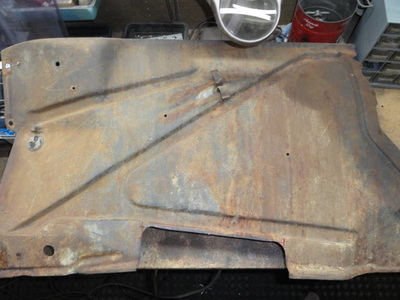 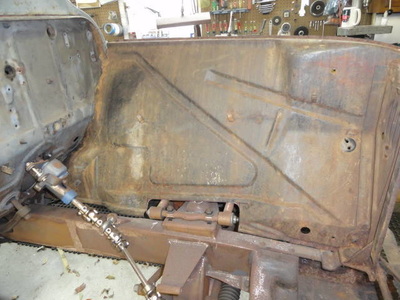 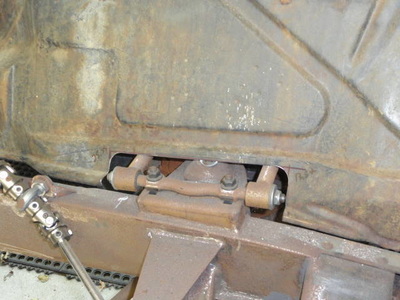 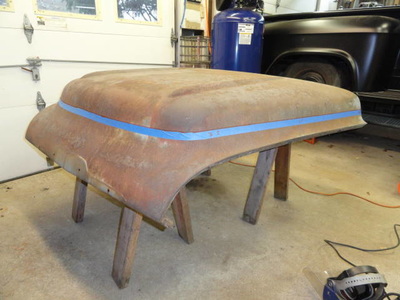 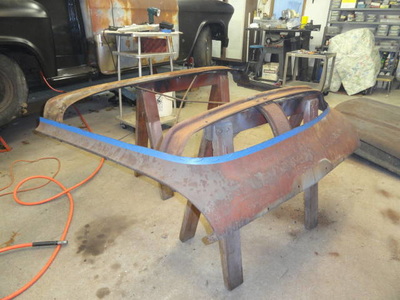 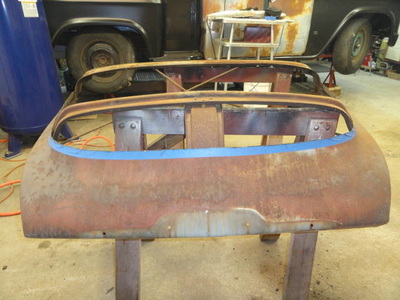 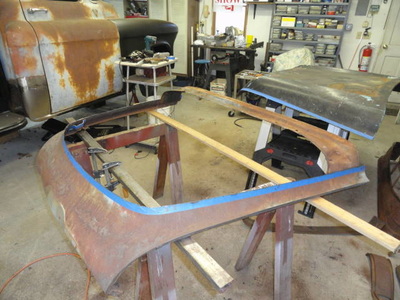 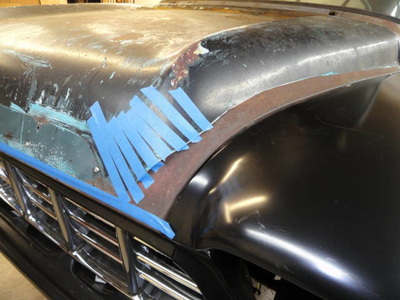 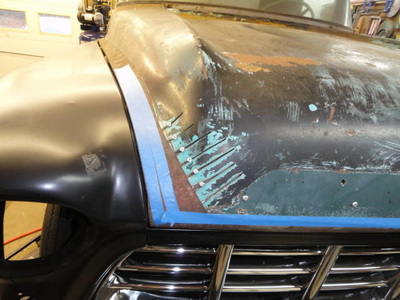 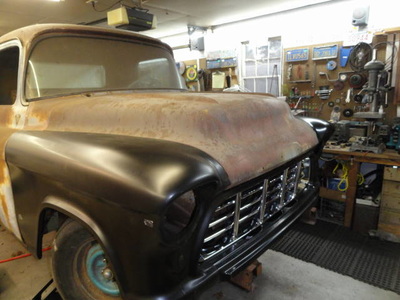 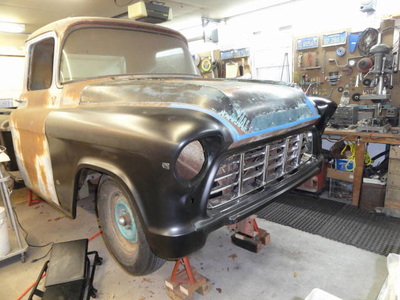 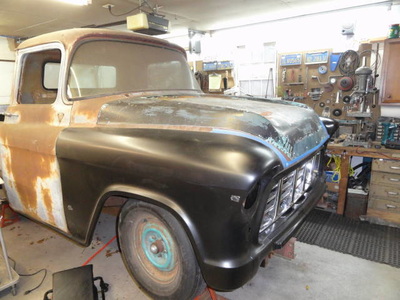 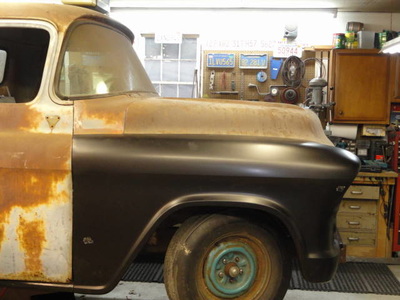 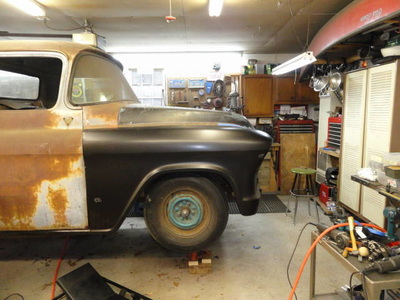 At this point the two hood skins were rough trimmed so the fit each other well but were still overlapping all the way around.  The hood was placed onto the truck and clamped into position holding the 57 frame in alignment.  The 58 skin was placed back in position and the two hoods were clamped together with sheet metal screws.  Using masking tape, straight even cut lines were marked out down each side and using an air saw the two skins were cut at the same time so they would match perfectly.  As I made the cuts, clamps were put on place to keep everything in place and aligned.  It was very gratifying to see just how well the two skins lined up down each side.

With the trimming on the sides completed, I started the welding process, welding 1/4" sections adjacent to the clamps down both sides.  As I welded additional trimming was done at the rear of the hood where I couldn't fit a clamp in so I had left the skins over lapped and held with screws.  After the sides were tacked together, the front was trimmed and welded in the same fashion.

Now what was left was the transition areas on both front corners.  Here I made a series of cuts radiating out from the edge that would allow for the top skin to be shaped and pull down to match the lower skin.  More cutting and fitting took place until top and bottom lined up then it was all tack welded together.
Next will be finish welding and replacing the under cross braces, but I want to get the doors repaired first so that all of the front clip can be fine-tuned than fit together. 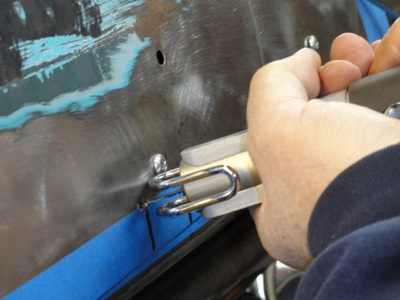 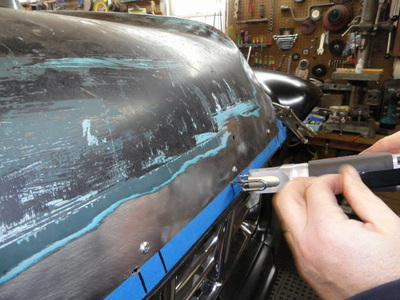 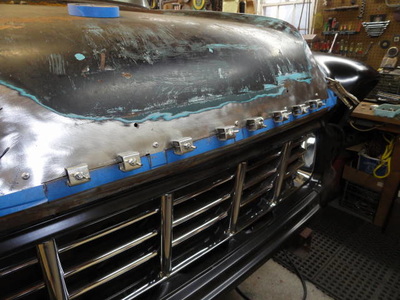 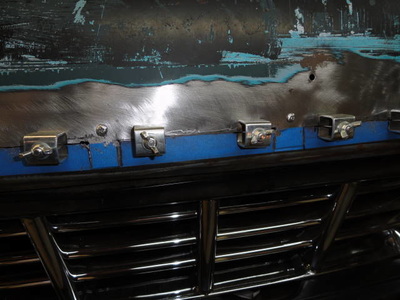 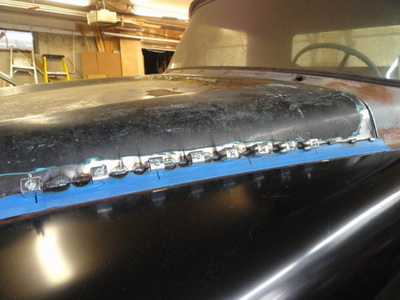 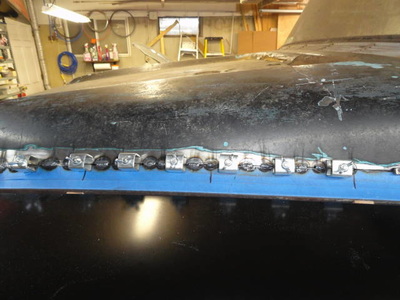 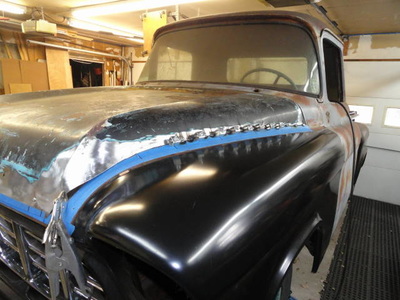 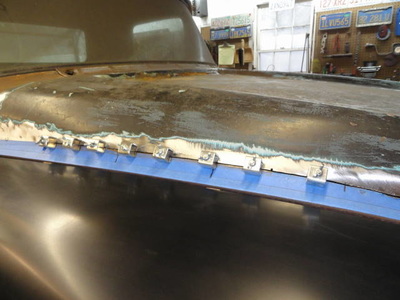 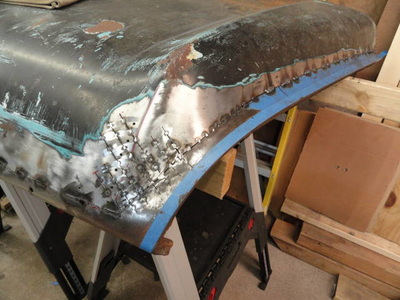 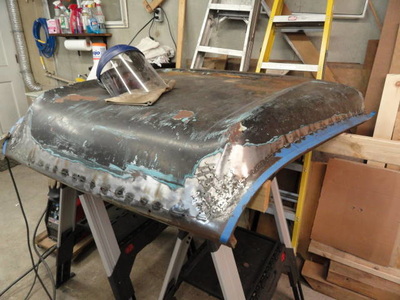